Ok, fine. I lie. I had only an hour and a half with “Tony”. Enough to be charmed.

I say two weeks because I received the WhatsApp invite from a Singaporean producer two weeks before. We want to chat with you before we decide if you’re qualified to appear on screen across from Mr X who’s flying in from the US.

Who the heck is this? Somebody so famous that he must remain anonymous while he sends an advance troop, scouts to survey the terrain? Yet also somebody who wants to come to Singapore to meet not its property developers, not its politicians, not its hawkers…but its writers?

That overlap between fame and grit. Must be a very small demographic. VICE came to mind. Ok, I said, trying to hide my excitement.

Having apparently passed the telephone interview, the Singaporean producer tells me that Anthony Bourdain is filming his third season of Parts Unknown and the first episode will be about Singapore. I had watched the show a couple of times and really liked it. Food, so long the centrepiece of his work, had become an accomplice to culture, identity, roots. I also loved the cinematography—the dark, hypnotic, Blade-Runnerish palette for bits of Shanghai hinting at dystopia.

Don’t tell anybody about this, the producer says, all very hush hush.

But she was right. The name Bourdain really does stir the soul like no other. I mention it to a couple of close friends, demanding their secrecy. Soon a friend who owns a restaurant starts lobbying for inclusion. Others offer their congratulations, as if this opportunity alone vindicates my writing career path.

“But why did they ask you?” cracked the more sardonic—and maybe contemplative—of my friends. Well, like so much else in life, I think it’s just luck and networks. Friends of friends. The Singaporean producer asked Tanya Angerer, a good mutual friend, for references. (Tanya and Melanie Chan, another mutual friend, appeared alongside me on the show.)

The two New York producers, Bourdain’s long-time collaborators, had now started communicating with me directly over e-mail. Can you suggest an economist? Easy, Donald Low. Of course, I declared to them my overwhelming bias: Donald’s a good friend with whom I co-authored my second book. Donald, so overburdened by interview requests that he often dithers, this time responded instantly.

And that is half the interviewee selection story of Parts Unknown: Singapore. One of their prerequisites, I later realised, was ethnic comprehensiveness. Chinese (Donald), Malay (comedian Najip Ali), Indian (me), Others (Eurasian chef Damien D’Silva), adhering to Singapore’s well-known CMIO model that guides ethnic policies.

“So where would you like to take Tony?” By that point I had started mimicking them, and everybody else in his immediate orbit, in just saying “Tony”. The names “Bourdain” and the fuller “Anthony Bourdain”, hitherto so ingrained in my food-writer-adoring mind, quickly slipped from my vernacular. Friends still make fun of me. “Oh, you call him Tony, izzit?” Well that’s how he introduced himself! It seemed natural, understood, not some false humility or pretentious attempt to connect with the salivating masses of self-proclaimed foodies.

I suggested a 7am breakfast of my favourite Singaporean dish, bak chor mee, mushroom minced meat noodles, at Ah Hoe Mee Pok. It ticks so many boxes. Bak chor mee, or BCM—yes, we love our acronyms—is a dish whose quality has suffered immensely from economic and globalising forces. Ah Hoe is one of the few good ones left, with the most lovely, chewy egg noodles cooked al dente—think fresh pasta tossed in vinegar and chilli—paired with a deep, rich pork broth, in which float homemade fish dumplings, pork morsels, and bits of cabbage. 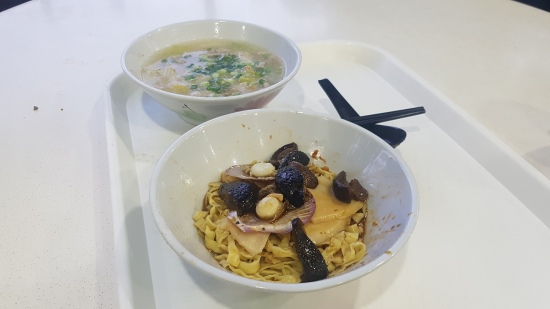