Dear friends, given the recent hullabaloo over the arrest of a Singaporean cartoonist, and the fact that it’s Labour Day, I thought I might share a somewhat naughty cartoon that pokes fun of Lee Kuan Yew’s handling of workers (Pekerja), the opposition (Pembangkang), minority cultures (Kaum minoriti) and Chinese education (Pendidikan Cina).

This is the front cover of the Feb 1983 issue of a now defunct Malaysian bilingual monthly publication, Nadi Insan. This hangs on the “Press Freedom Wall” in Malaysiakini‘s KL office.

No disrespect to the old man; but I always find it interesting to see depictions of Malaysia and Singapore (and our leaders) by the other side. 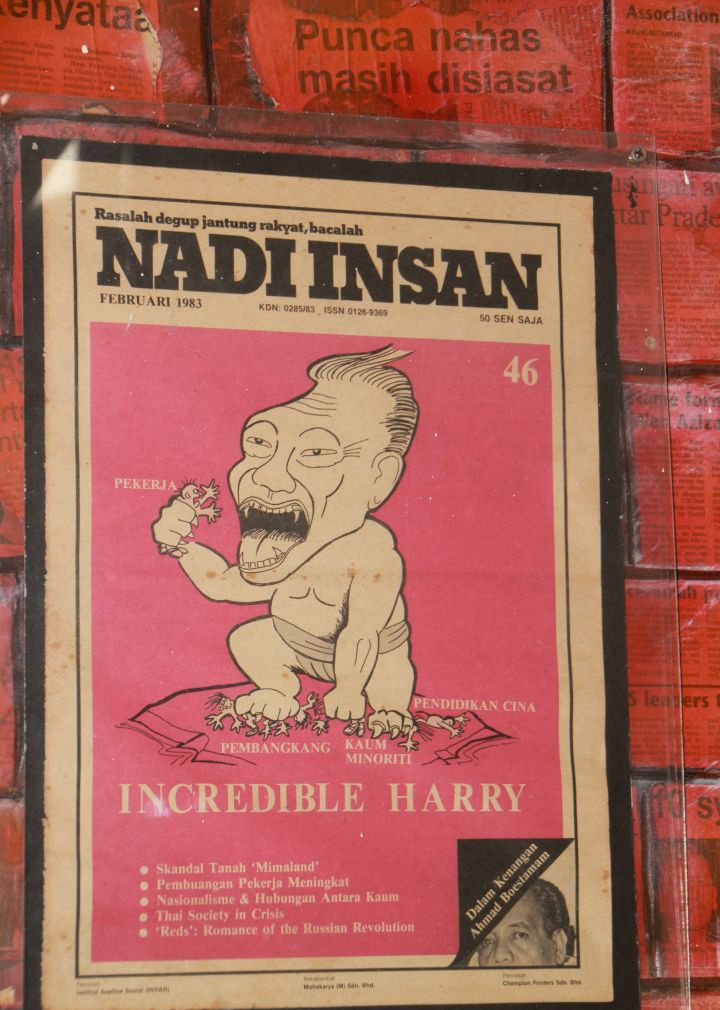 I have so many questions about this cartoon: Did LKY do something particularly nasty in late 1982 to provoke this cover? What exactly does the caricature represent? It seems like he’s wearing a sumo outfit, but with the face and fangs of one of those scary Indonesian monsters. Comments, thoughts much appreciated.

Sumana, my best friend, and I visited Malaysiakini’s office in Sept 2011. We were there to interview Steven Gan, one of the co-founders of Malaysiakini, and probably one of the braver and more inspirational people I’ve met in Malaya. I write about Malaysiakini and Steven in some detail in Floating on a Malayan Breeze, my first book.

(Malaysiakini, for the benefit of my foreign friends, is an Internet news pioneer in Malaya. It broke the Malaysian government’s stranglehold over media and communication in the early 2000s, and has played a key role in the country’s political awakening. It also experimented and found a fairly sustainable Internet newspaper business model.)

Here is a shot of Steven and I chatting in front of the Press Freedom Wall. 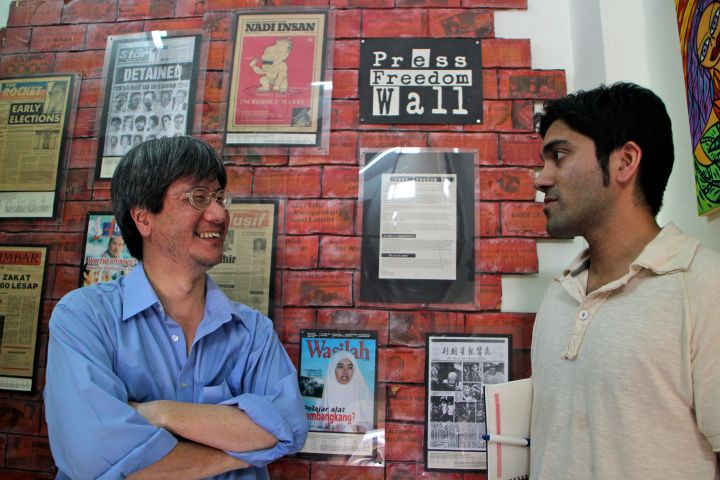 As you might imagine, I find it quite interesting–if not altogether surprising–that this cover should have pride of place on Malaysiakini’s Press Freedom Wall.

Going back to Leslie, of course, as a writer, I find it depressing that our government wants to lock up a fellow artist. Even more worrying to me is the number of Singaporeans who feel that Leslie is not a real artist, or that the Singapore government should be the one to decide what is legitimate art and what is not.

In any case, thanks, Malaysiakini. Let’s have a laugh, and then carry on with our Labour Day…