The Air Mauritius inflight safety video is your first sign that Mauritians are different.

I generally dislike these videos because I miss what they replaced—inflight crew members acting out routines, some with the clarity of synchronised swimmers, others the coordination of a blind macaque. This little fandango was always the best indication of the kind of inflight service to expect.

The Air Mauritius video implores you to watch. It opens with three crew members standing, rather incongruously, in full uniform on a gorgeous beach as the sun sets.

A later scene shows a husband and wife on deck chairs by another beach as their son builds castles in the sand. Suddenly, two yellow oxygen masks drop from the palm trees above, and they nonchalantly strap them over their unimpeachable holiday grins.

Another scene shows them inflating yellow life jackets, except they are not about to evacuate an airplane, but jump twenty feet over an idyllic Mauritian waterfall into its wading pool. The actors look like they are being paid to have fun.

Even the tutorial for adopting the emergency brace position before a crash has been turned into an eco-tourist fantasy, set by a gentle creek in the rainforest.

The message throughout is clear: even when the world around is collapsing, Mauritians can maintain their relaxed, carefree, smiling disposition. It is all in the mind.

By the end of the video, I’ve been introduced to several Mauritian attractions, but am still clueless about the plane’s emergency exits.

Mauritius is a tropical island state in the Indian Ocean, more than 1,000km to the east of Madagascar and about 2,000km from continental Africa. Of volcanic origins, Mauritius is blessed with magnificent mountains, gargantuan rock formations, crystal-blue lagoons, rivers, stupendous waterfalls, fertile lands and thick forests, on about 1,865 sq km of land—one-fifth the size of Puerto Rico, or two-and-a-half times as big as Singapore.

The island is surrounded by the world’s third largest coral reef, which is typically a few hundred metres from shore. Mauritius’s 150km of beaches are mostly gateways to flat, gentle lagoons, protected from the open ocean by this outer barrier.

At some you can walk a hundred metres offshore and still only be waist deep (though beware of the prickly coral shards). Young children flip and flop around without any fear of undercurrents or sudden deep pockets. When fishing boats, leisure craft and even kitesurfers want to venture further out, they need to navigate through narrow depressions or gaps in the reef.

When Li Ling and I are driving around the country, there are many times we just stare out the window, mouths agape, at another endless sunset, or another domineering escarpment, or another full rainbow, or another double rainbow with one pot of gold shimmering above the distant waters, the other touchable behind the sugarcane field. We debate whether Cape Town or Mauritius has prettier landscapes. Now, five months into our stay, the same natural formation still takes our breaths away—scenic desensitisation has yet to set in.

It is almost laughably easy to find solitude here—whether on a soft, unspoiled beach gazing out over azure waters, on mountain trails leading to spectacular vistas, or beneath a sprawling banyan tree, marinading in your escapist dreams.

Yet for all the natural beauty on this self-professed “Paradise Island”, Mauritius is as interesting for its social milieu. How did an African island whose first inhabitants were Whites become an Indian-majority country of 1.3m people?

At the Sir Seewoosagur Ramgoolam International Airport—no, nobody calls it that—we meet a young “Hindu Mauritian” whom I will call Chetan. Having been introduced by a mutual friend, Chetan, who drives a taxi and occasionally rents out his family’s cars, is waiting for us with a 1-litre manual Suzuki Alto.

He doesn’t want to see my passport or driver’s license. Instead he pulls out a standardised car rental form with those generic outlines of cars and invites me to inspect the car alongside him.

Chetan sports the kind of haircut popular among young, middle-income Mauritian men: closely-cut sides and back, with a very short mohawk whose back end has been dyed, in Chetan’s case, yellow. Intricate shaved line designs on the sides make his head resemble a hieroglyphic signboard. Like most Mauritians, he is dressed smartly, with a well-fitted shirt and jeans.

The Alto is near the end of its life. The plastic cover over the rear left lights has broken and is barely held in place by clear masking tape, which wraps around the side of the car’s body. “No, that’s OK,” Chetan assures me, when I ask if we should mark it down.

There are several long scratches across the doors on the passenger’s (left) side. Meanwhile, on the driver’s door has been scratched a geometric design—a cluster of triangles enclosed by a circle—which looks like it could be evidence from the X-Files.

All these are also OK, says Chetan. He makes just one single mark on the sheet, for a small hole in the metalwork that reveals a bit of rust. In Mauritius, unless something is on the verge of collapse, one is not meant to worry too much about it.

Chetan takes no money from me and needs no credit card guarantee. We simply agree that I will pay him in three weeks when I return the car. “Oh, and one more thing. If the police stop you, show them the insurance papers. But don’t tell them that you’ve rented the car. Just say it’s your friend’s car.”

Like most Mauritians, Chetan speaks English with a heavy French accent. It takes me a while to get used to Chinese and Indians communicating in French and French Creole, which is the lingua franca while English is the medium of instruction. “If you’re going to call, please speak in French. If you’re going to WhatsApp, please type in English,” one Mauritian tells me.

Perhaps, I think, Chetan trusts me because of our mutual friend. Yet I encounter the same unhurried, almost lackadaisical attitude towards money across Mauritius. After ten hours of kitesurfing lessons at the ION Club in Le Morne, thirty minutes from our apartment, I have racked up a bill of more than 400 euros. The only information about me the operators have is my self-declared name, which may as well have been Scooby Doo.

When they finally ask me to settle my tab, it is with embarrassment—a sentiment subsequently shared by a female house cleaner and another rental car guy—as if they are imposing on me to pay them for services rendered.

Mauritians are disarmingly friendly. Strangers wave, ask where you’re from, and are always willing to stop. Once, when we are driving around searching for a restaurant, a young Mauritian guy, perfumed for his date, stops, jumps into our car—“it’s easier if I show you”—and directs us about ten blocks away from the direction he was walking. When we’ve reached, he simply hops out and turns back, his schedule delayed by ten minutes.

On the Flic-en-Flac beach, a local favourite, a middle-aged lady approaches us and we have a jovial, five-minute conversation about life in Mauritius.

As we are about to walk on, she apologises profusely for what’s she’s about to say next. “I also happen to make some seashell jewellery. Would you like to see some? No? That’s fine, have a lovely day!” Even the beach touts are, well, not really touts.

And the Mauritians are well aware of their own gregarious hospitality. “How do you find Mauritian people?” is a standard follow-up to “How do you like Mauritius?” The questioner awaits your answer with the coy anticipation of a girl who never tires of hearing that she’s pretty.

Mauritians are proud of their own tribe, confident that a visitor might regard the local people—as much as the beaches, the dolphins, the mountains and the food—as a key attraction. (The flip side of this relaxed attitude, of course, is that often times things move sloooowwly.)

And they appear to have fostered a real multiculturalism. Chinese and Indians have mixed with Africans and Whites for almost two centuries, along with many other much smaller groups, including Malays. Singapore, my home, is diverse, yet Mauritius takes it a step further because Africans are also part of the local mix.

Perhaps any conceivable shade could be accepted as local Mauritian, in a rooted, historical way; a different sort of acceptance from what one finds today in many global cities, where agglomerations of second-generation migrants constitute a giant, breathing Bennetton ad (energising as that is).

Yet acceptance never implies equality. Beneath Mauritius’s rainbow patina are deep-seated biases and a history of discrimination, particularly against the Creole community.

The story continues at Mauritius diary 2: On race 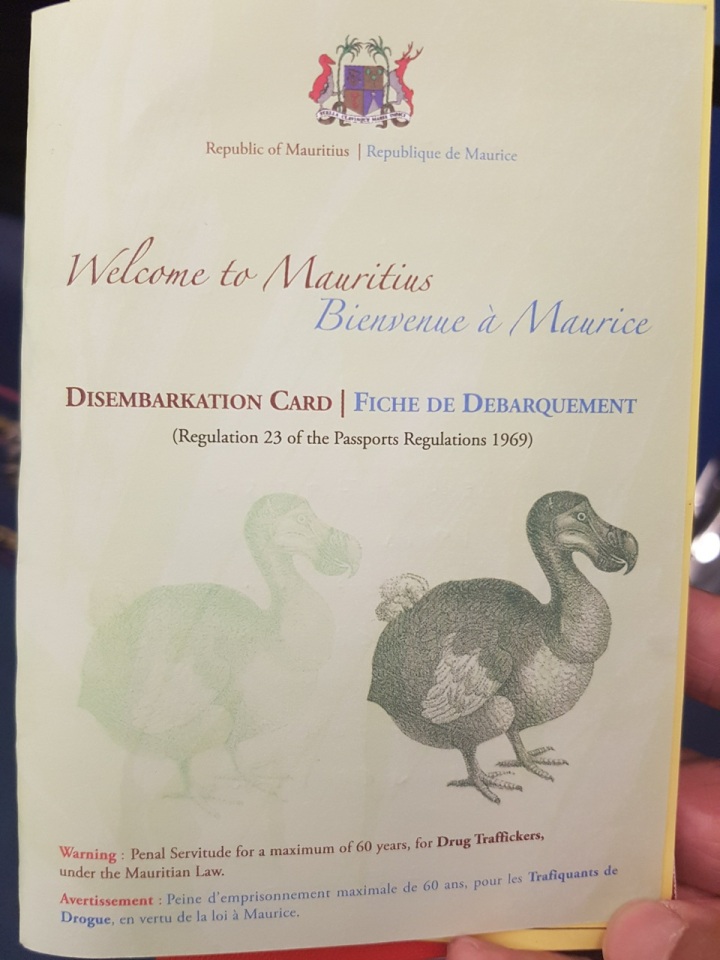 The extinct dodo is a national symbol, found everywhere. Separately, Mauritius is the only place after Singapore where I’ve encountered so many arrival drug warnings—on the plane before landing, on the arrival card here, and multiple signs in the airport. 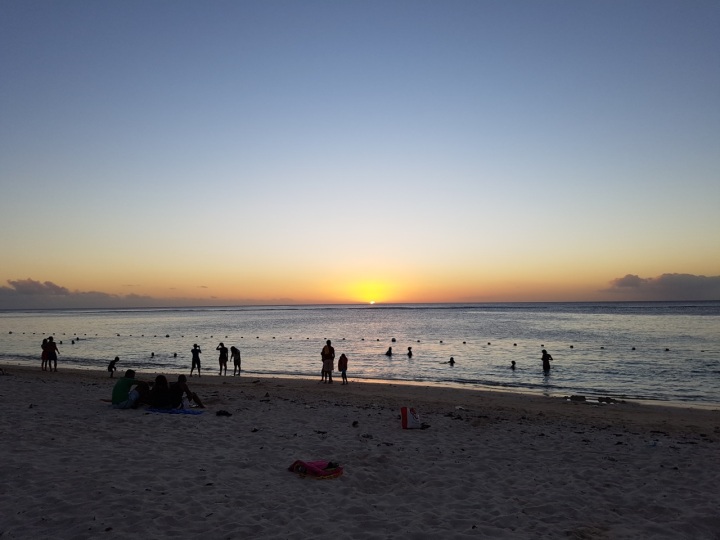 Most times there is nothing on the horizon; just the Indian Ocean 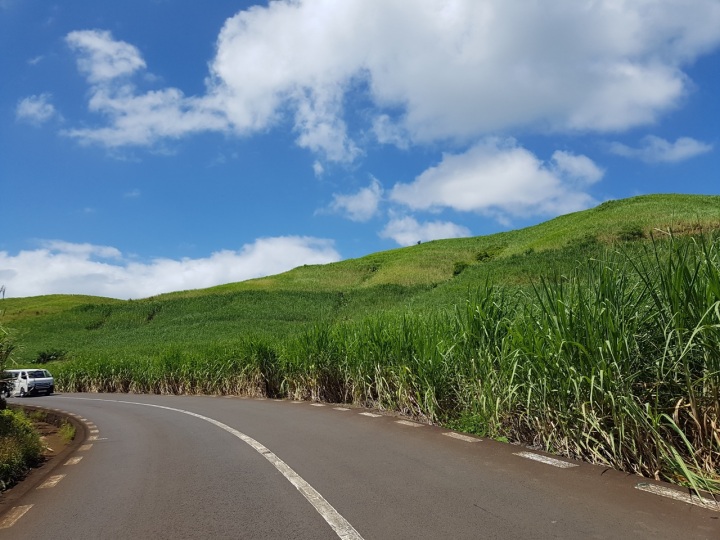 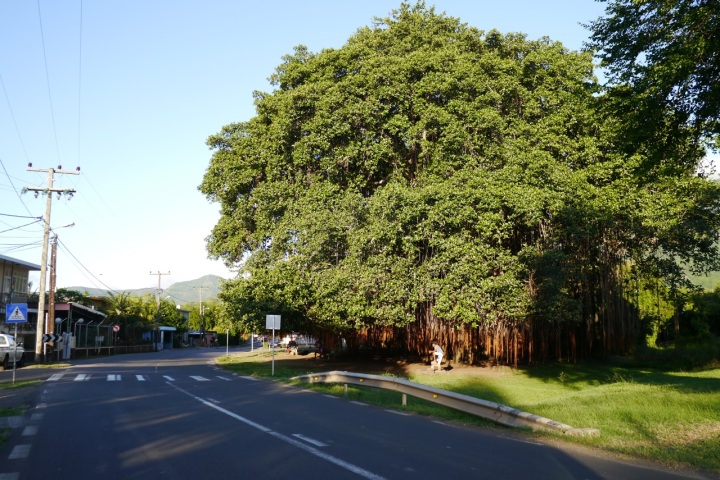 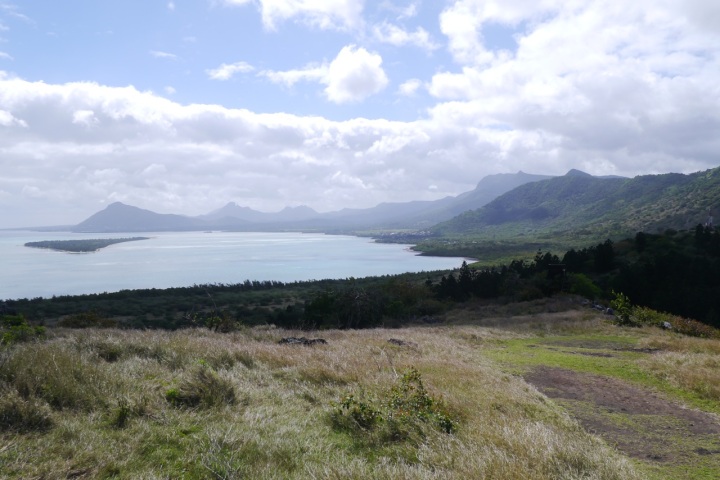 At the south-west tip, facing north along Mauritius’s west coast 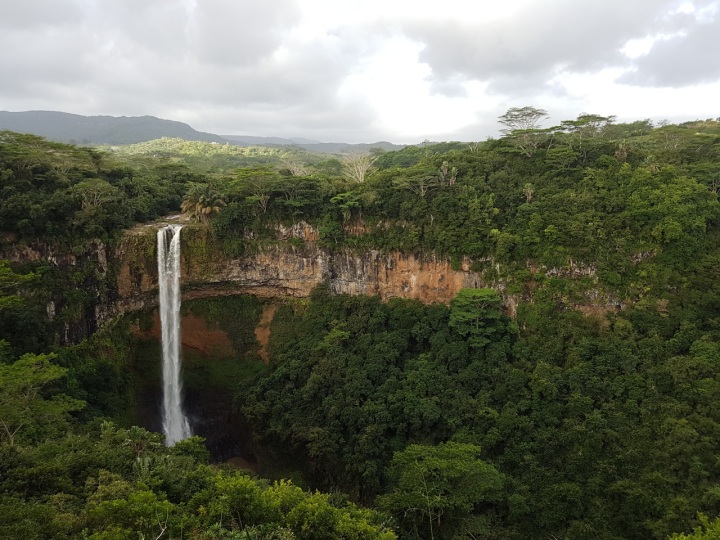 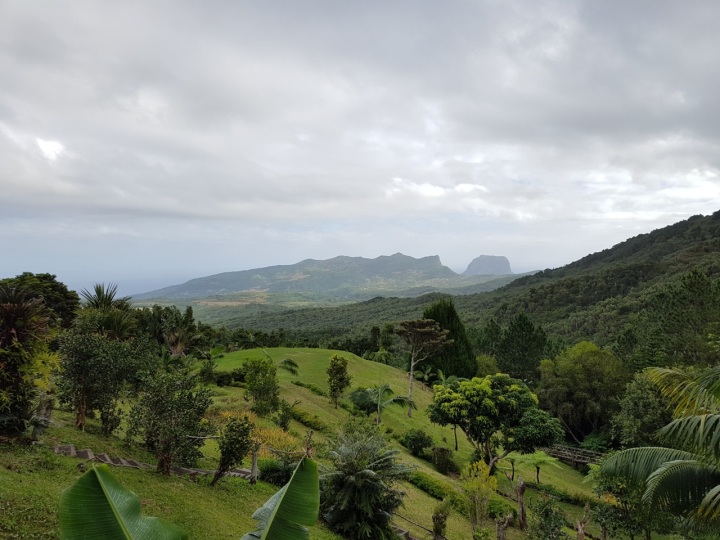 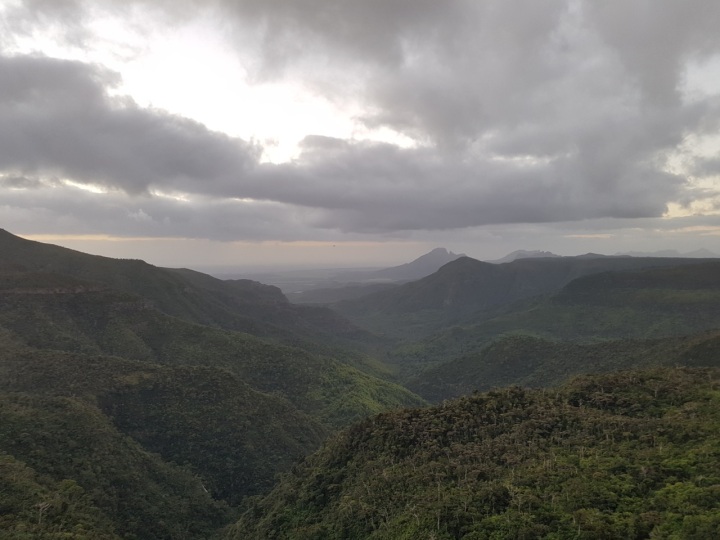 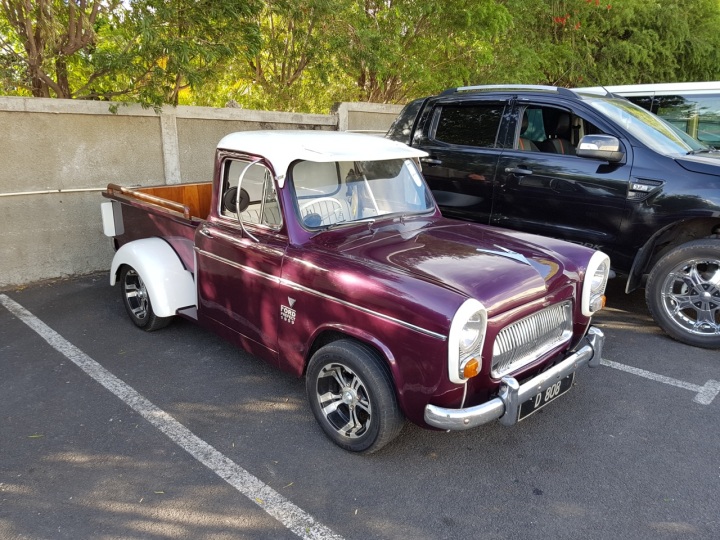 With our Suzuki Alto, it is worth noting that I had asked Chetan for the cheapest rental car he had. Mauritians do fuss over their cars, and we’ve randomly run into many petrolheads, including an Indian guy and his 1950s Ford Truck 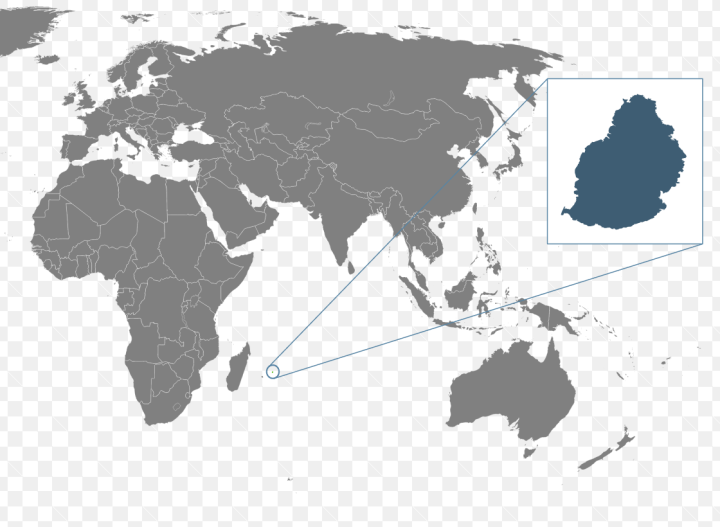