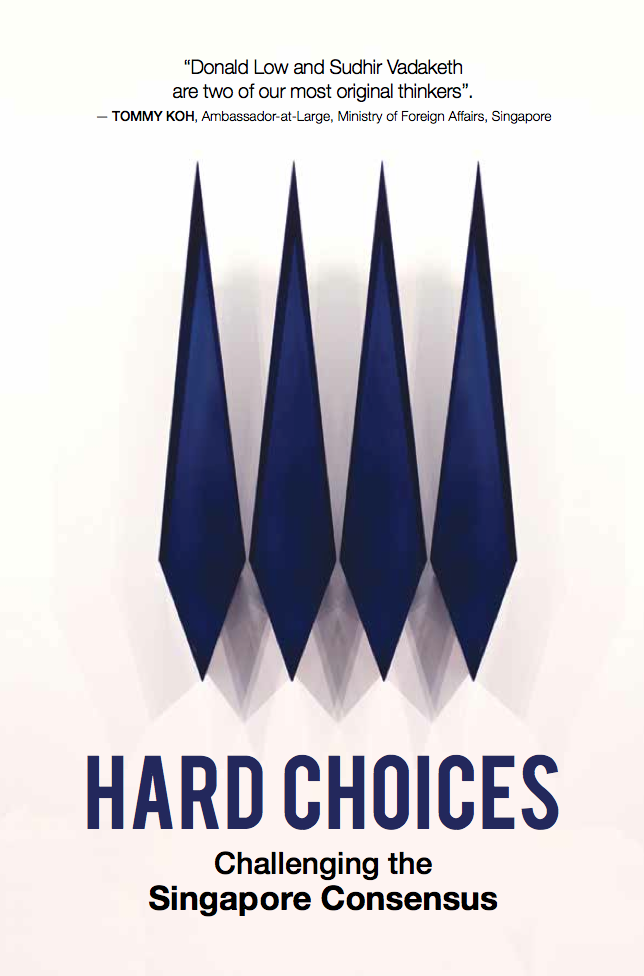 Dear friends, I just wanted to share some thoughts from my second book launch this past Tuesday. If you want to find out more about the book’s content and cover, please see my earlier post here.

I really enjoyed the launch. As in, it was genuinely fun. Lots of banter up on stage between Donald Low, my co-author, David Skilling, the moderator, and myself before the event. Engaging conversation and audience questions throughout on a range of important and sometimes emotive subjects, from Goh Keng Swee’s doubts in 1972 about Singapore’s emerging economic model to the recent uproar over the mooted Philippines Independence Day Celebration in Singapore this June.

If you are keen to see what you missed, here is a 22min video of the session.

The audience itself was a great mix of young and old; strangers and familiar faces. I met a young polytechnic student who was lamenting the new ASPIRE internship programme, which he believes is the government’s way of boosting our labour force at the expense of students’ freedom of choice (poly students apparently will now have to work for a few years before they are allowed to apply to local universities).

I also caught up with Tay Kheng Soon, that old doyen of Singapore’s architecture and social activist scenes (see here), who wrote to me the next day complaining that he couldn’t get a book because the queue was too long!

Ah yes, book sales. I often find sales-related discussions meaningless, partly because numbers shouldn’t matter that much, but also because Singapore has such a small reading market that it all makes for very depressing reading. That said, given that I’m trying to make it as a full-time writer, I should really be paying more attention.

Sales of Hard Choices have certainly challenged the consensus. Including pre-orders, we sold more than 300 hard copies on the launch day. In Singapore a book is considered a best-seller if it hits 500-600 during its lifetime, Dan Feng, publisher at Select Books, once told me. At the Sep 2012 launch of my first book, Floating on a Malayan Breeze, we sold about 100 copies. To date Malayan Breeze has sold more than 2,000 globally. I will be delighted if Hard Choices tops 5,000. By international standards, as you know, this is small beer.

Moreover, this is not about personal financial remuneration. I earned about S$1 for each copy of Malayan Breeze, and will receive much less for Hard Choices, whose income will be split with the different contributors. Of course, we are still operating in the antiquated publishing world where publishers (like NUS Press), distributors (like APD) and retailers (like Kinokuniya) receive the huge majority of the book’s proceeds. That model is evolving rapidly.

Nevertheless sales of Hard Choices are important to me simply as one indicator of how widely the book is being read in Singapore. And this brings me to my last point. My day—and possibly year—was made by a short 3-min conversation I had after the launch when I was on the way down to the carpark.

Once the crowd had mostly left, I bought up the remaining 52 copies from Bookhaven, the NUS bookstore, to fulfill pre-orders by Facebook friends and readers of this blog.

Reme, the ever-smiling, Malay sales assistant at Bookhaven, offered to help trolley the books down to the carpark. Donald and I had met Reme the night before when we had come in to Bookhaven to sign 150 copies of the book (nowhere near enough, as it turned out.) Bespectacled, soft-spoken and with long-braided hair, Reme had grinned at us as we popped open Asahi beers in the bookstore, and started guzzling and signing.

After the launch, on the way down to the carpark, Reme asked how the launch had gone. He also told me that he had read through the Preface and Introduction of the book the night before in the bookstore.

Now beneath the spectacle of the huge launch, the elegance and symbolism of the book’s cover, the flattering plaudits from Tommy Koh, Don Emmerson and M Ramesh, the backslaps by old and new friends, and the encouraging book sales, that one comment by Reme, somebody who self-identified as being “at the bottom” of our grossly unequal country, meant the most to me.

I told Donald the next morning when I met him, and we both shared a quiet, satisfied second or two. Job done. 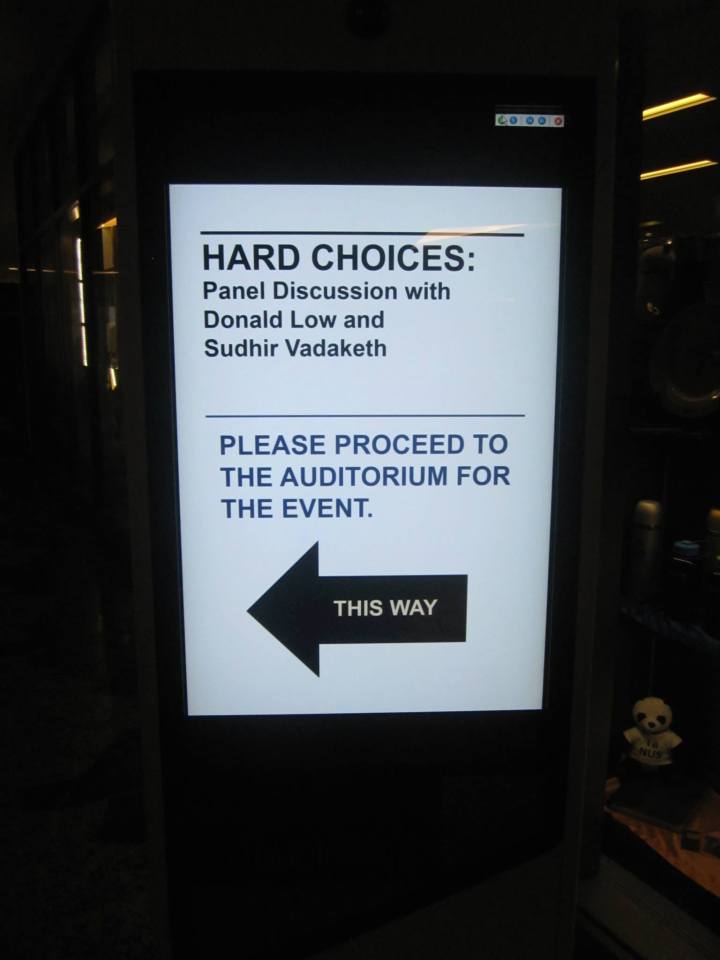 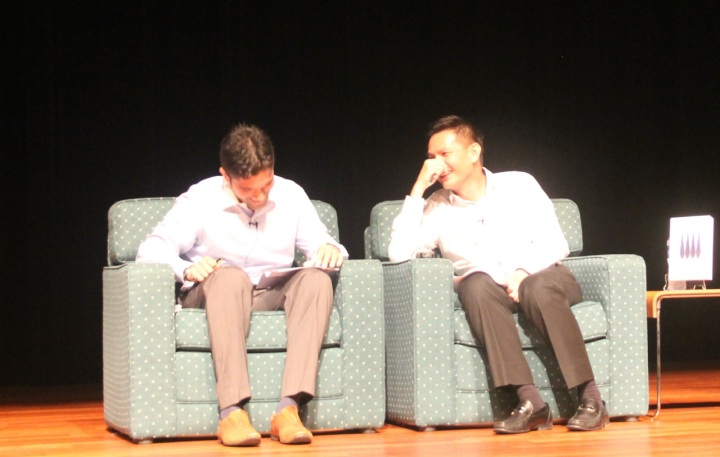 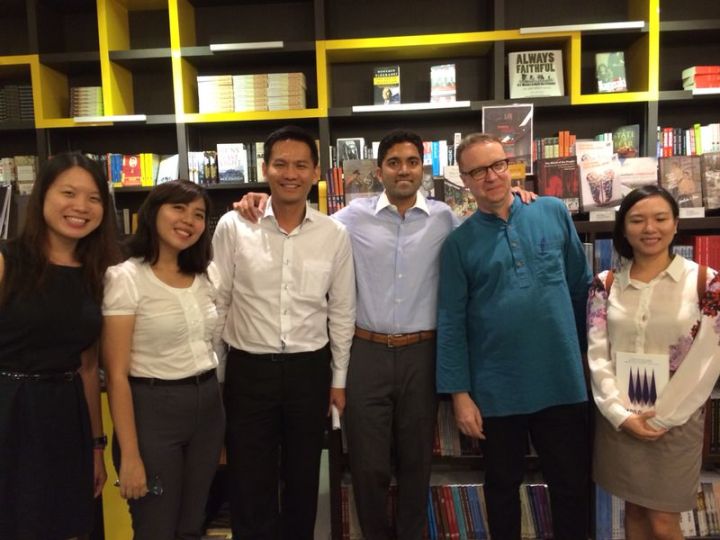 With the NUS Press crew